RM Studio uses the Risk Profiles to establish a risk assessment model for business entities. A default Risk Profile is displayed if you defined which Categories your asset is a part of. Just to give an example, let’s say define asset #1 as “mobile phones”. Then when you select the Risks tab (1) in the risk assessment you’ll see that it has many threats predefined.

Then you can adjust the impact of the threat (2), the probability of threat (3), and the vulnerability of asset (4). You can then assign a risk owner (5), it’s then his responsibility to follow up and prevent that threat. 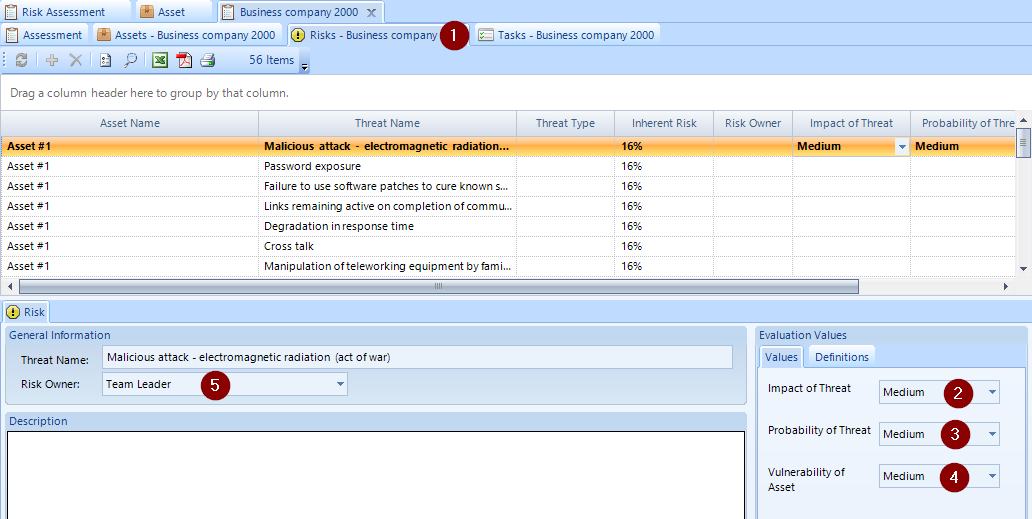 RM Studio then update the total risk of the asset when you have filled in the all of the evaluation values for each threat. The calculation is not executed until you save your work.

The different values for the security threats are calculated as follows:

The first security risk calculation which is also known as the base security risk starts with a single risk and is commonly based on four variables, the probability of the risk, the impact of the risk, the vulnerability of the asset towards the risk and the value of the asset of which the threat risk is associated with. All of these four variables have been evaluated on the scale between 1 and 5. What we do is we add all the four evaluations together and divide with the highest possible number, that is 20, but we also shift the result by 3 to the left. So we end up having:

The results for various values of these variables can be seen in the four dimensional matrix at the end of the user manual.

Security risk of an Asset and the Risk Assessment